First, I have to thank Ashley from Handmade Haven for contacting me and offering to make plans for my media console. She’s so talented, and I’m honored that she liked my project enough to feel comfortable having it on her site along with all her beautiful builds. She’s amazing!

Now on to the build! 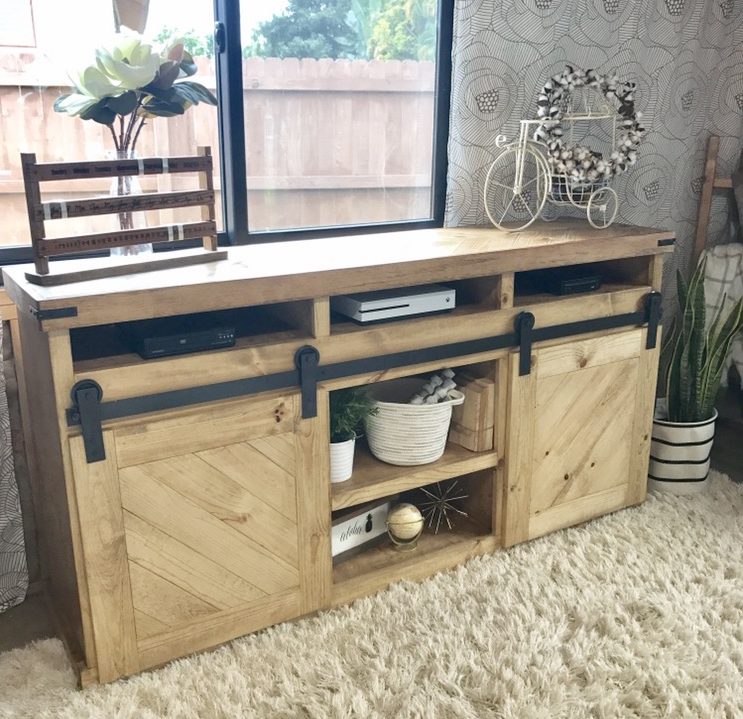 I originally designed this piece for my own home. I had seen lots of beautiful consoles out there, but none of them had shelves at the top for our electronic devices. Yes, I could put them in the center, but I didn’t love that look quite as much. So I sketched one out for myself.  Then I had a customer request a sliding door console, and when I showed her my sketch, she loved it!

I looked at plans from Shanty 2 Chic as well as Ana White and Jaime Costiglio to get me started and give me a jumping off point. I recommend checking them all out for more tips and tricks!

For the full plans on my console, please visit Handmade Haven!

Since I had planned to build a second one for myself, I wasn’t great at taking progress pics at this point. I wanted to see how it all came together first. When I build the second one, I’ll update with more pics. 😉

This is the point when I finally thought, “I think this might actually work!” Ha!

Ashley has all the plans laid out, but a few things I wanted to point out. Make sure you wait to cut your face trim (the 1×2’s and 1×6) until you’ve got the 1×4 base trim on. Then do the two end vertical 1×2 pieces and measure from your piece to make sure you’re not off by a touch. Then the horizontal 1×6. Then the other 4 vertical 1×2’s (two long and two small for top shelf). And last the three horizontal 1×2’s across the middle shelf. You want a nice, tight fit, so even 1/4″ can leave a big gap! 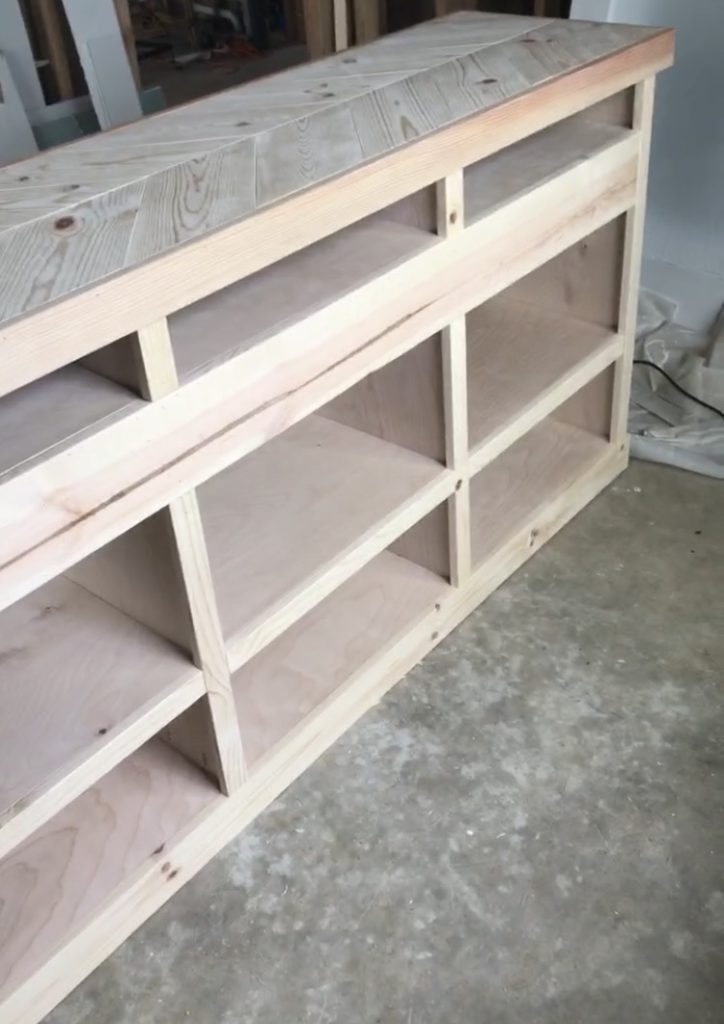 I will do a separate post on the herringbone pattern with a video soon. But I used 1×6’s and all 45 degree miters. I just attached them with brad nails directly to the plywood base.

I also mitered my 1×3’s at the corners to frame it out since I think it gives it a nice, clean look.

I stained it at this point before adding the track and hardware. I used Danish Oil in Medium Walnut per my customer’s request. I think it contrasts nicely with the black hardware.

I find that the Danish Oil tends to dry out the wood fairly quickly, so I sealed it with Minwax Polycrylic just a couple hours later. 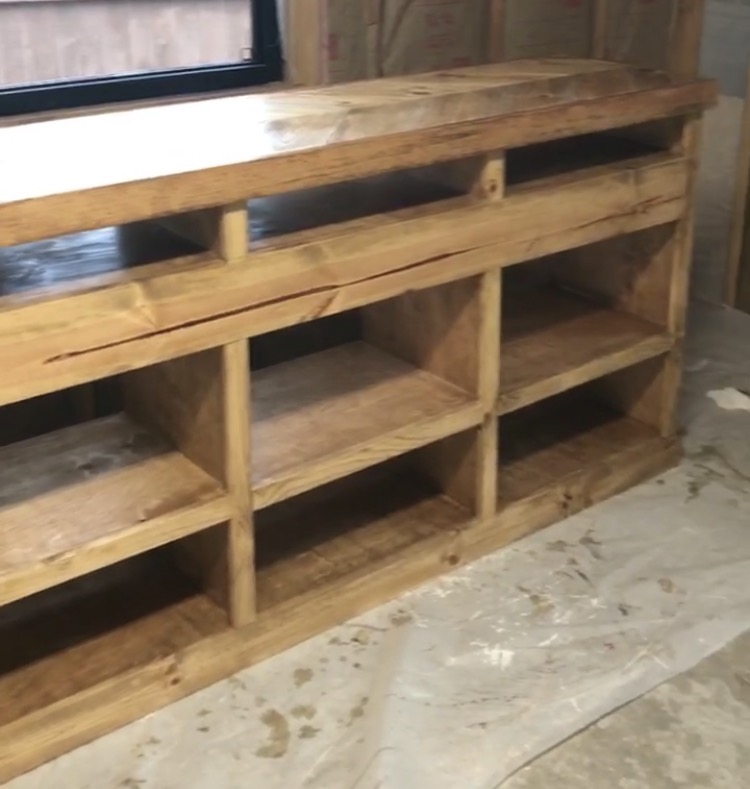 Then I moved on to the hardware. I used the Shanty 2 Chic plans for DIY sliding barn door hardware, and their tutorial and video were REALLY helpful.

I did end up making some changes and adjustments, though. Since I was doing two doors, I needed to buy double of the door hardware. I doubled everything but the track/bar. Since this is also longer, I wanted two additional screws and spacers to secure it better. I bought an 8′ aluminum bar, and I really didn’t want to have to buy another one for the vertical pieces on the doors, so I also shortened the length of those from the original plans. I cut my bar right around 71″, and the vertical pieces at 6″. 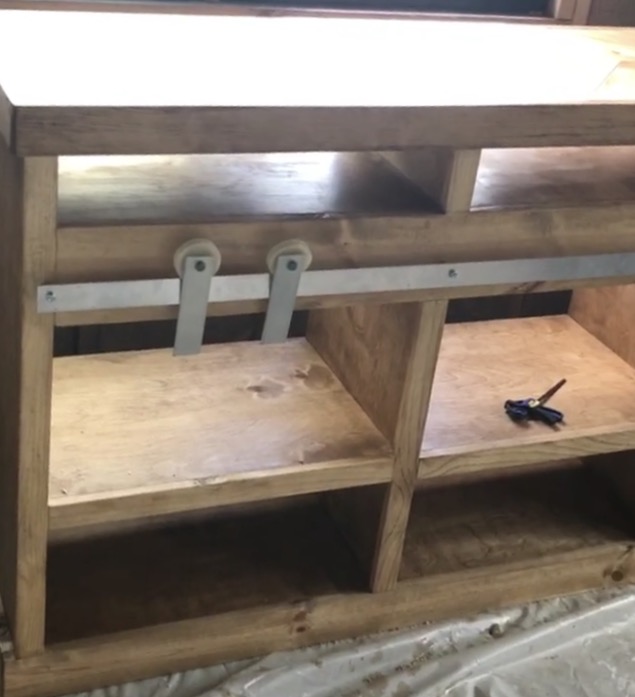 At that point, I noticed a couple things that I knew were going to bother me. One, there’s nothing to keep the doors from sliding right off the end of the track. Most barn doors have stoppers at the end to keep them on the rail.  And the second thing is that since the spacer is a full 1″, it leaves a big gap at the top, and then the bottom of the door swings closed. So from the side, the gap is uneven. It’s not a big deal, but aesthetically it bothered me a little.

To fix the problem, I got rid of the 1″ spacers. I went back to Home Depot and bought six 1/2″ spacers instead. I used 4 of them between the track and the console, and then I used two to go on the outside of the track at the two end screws. That provided a little stopper for my doors!

Be sure to either use shorter screws for the two middle spacers, or place them right where the vertical plywood is, or your screws will be too long and stick out behind your 1×6. It’s not a big deal and won’t be noticed, but just something to be aware of. 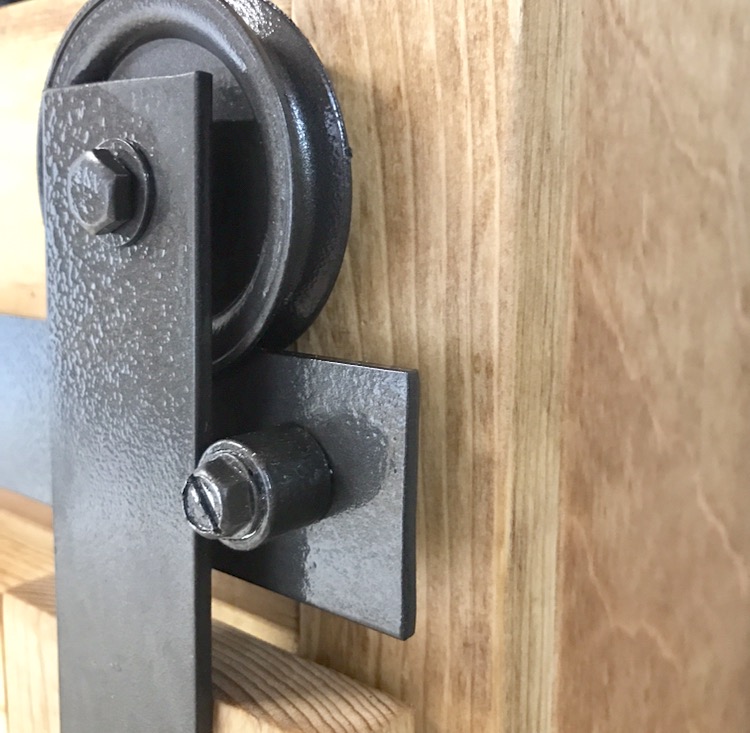 Here you can see how the door is nice and flush with the console. Perfect gap! 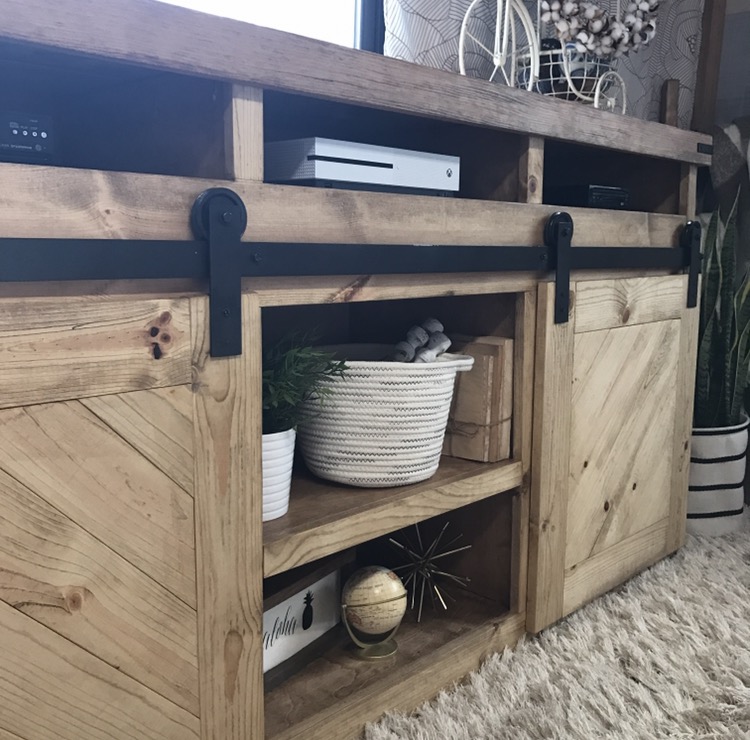 And the final step was to attach the backing and drill holes for the cords! I used a 1.25″ hole saw drill attachment to make a good size hole in each of the top three shelves. 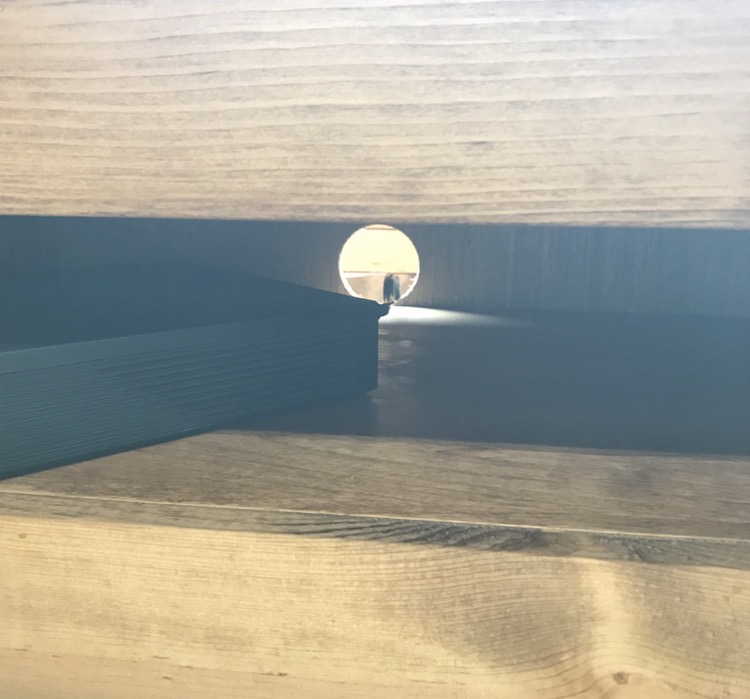 I think it still looks nice and neat but allows the electronics to be easily accessible. 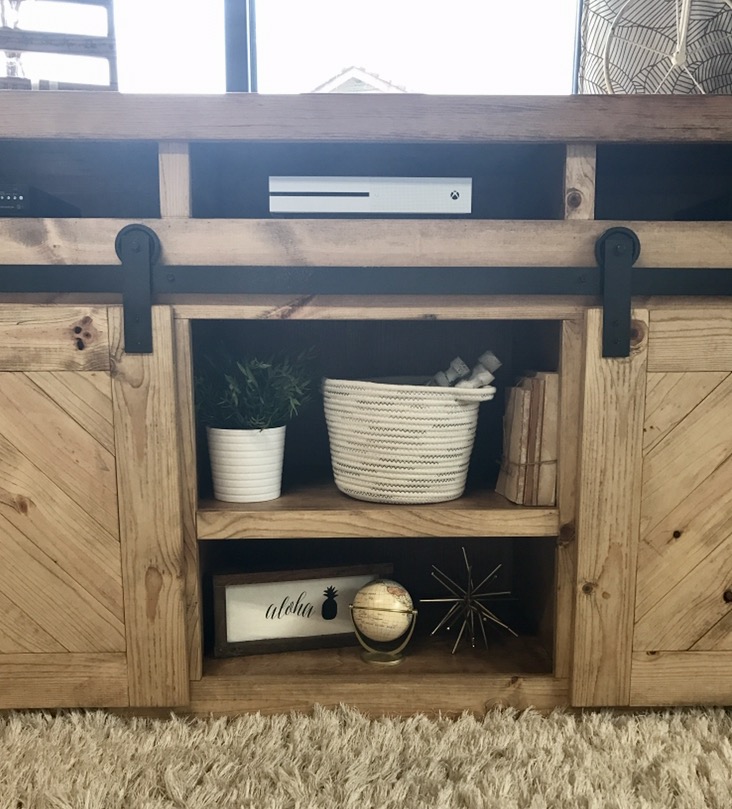 I’ll also try to do a video or tutorial for the door pattern if you’re interested? Also just more 45 degree angles. 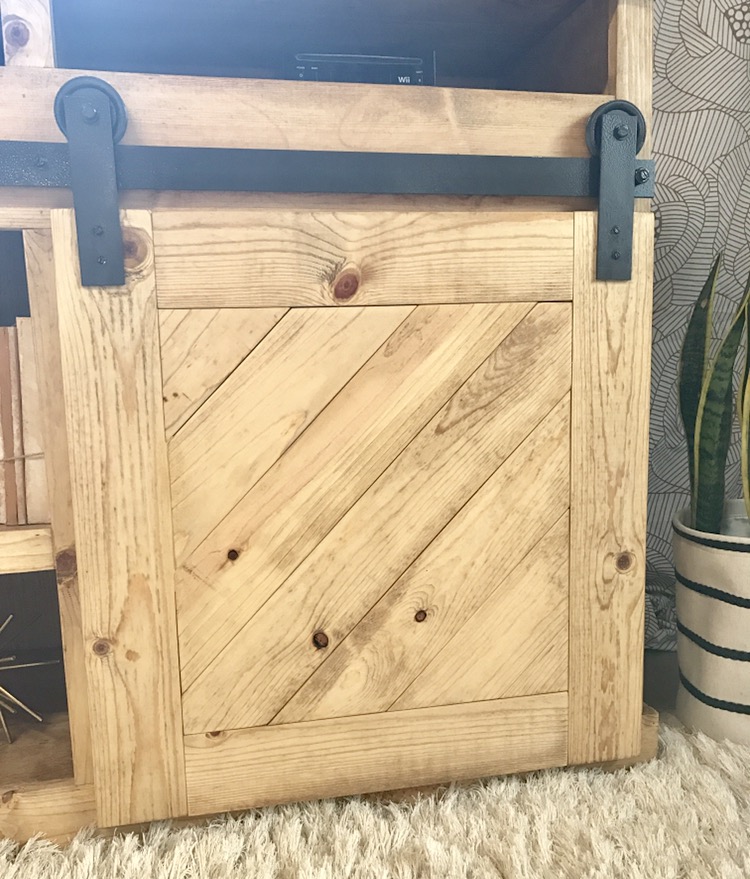 And one final tip, I used Rustoleum spray paint for all the hardware, and it worked beautifully! But I noticed that the top of the track was starting to peel and flake off. It stayed just fine on the plastic wheels (which actually surprised me!) but didn’t like the aluminum bar for some reason. I tried multiple different paints and sanding, but nothing worked. I finally decided to just sand off the top of the rail and leave the silver exposed, so it wasn’t just chippy paint everywhere.

It worked great! It looks like it was meant to be that way, and no more chipping! 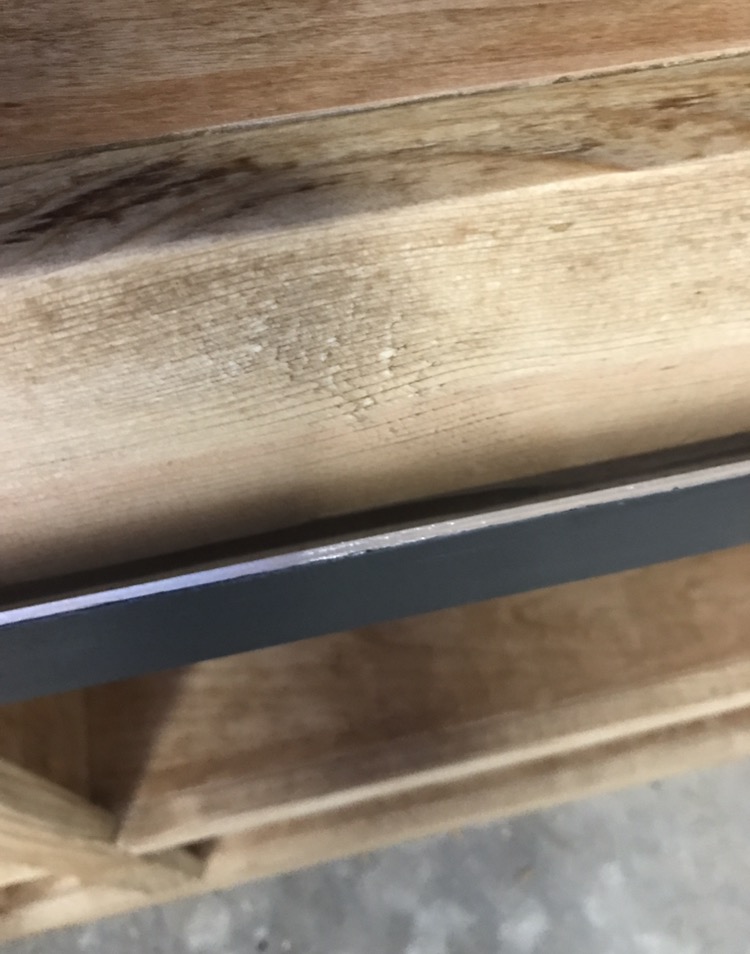 Thank you again, Ashley, for helping me get plans out to the world. You are a rock star!

** This is my original design and idea. I hope to ... END_OF_DOCUMENT_TOKEN_TO_BE_REPLACED