I have a confession…my children suffer from a severe case of “too-much-toy-itis”. Yes, it’s true. The toy monster vomited in my living room.

I tried to contain it with some of those shelves with individual bins for musical instruments, food/dish toys, puppets, etc. that only have a few items in their same category. But the dolls, stuffed animals, and dress-ups are just atrocious. Huge plastic bins that are so unsightly and crack and are awkward in our space. Blech.

Enter Ana White. She’s amazing. And truly makes me feel like I can do stuff. My stuff never looks quite as polished as her stuff, but I’m learning, and I’m working with pretty basic tools for the time being. I’d love to have a larger power tool collection in the near future. ((Dear sweet husband, please take this as a not-so-subtle hint to buy me tools for every holiday/birthday/anniversary for the next 6 years or until my collection’s complete)). Not that he actually reads my blog, so could someone else give him the memo?

Anyway, Ana posted plans for a beautiful upholstered toy box, and I knew it was time… 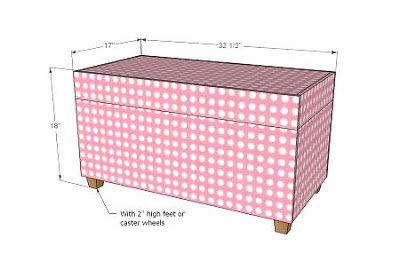 As I was going through the cut list and thinking of all the wood I would have to buy in order to make a few of these bad boys, I kept looking at our newly-destroyed kitchen and thinking how nice it would be if I could just somehow salvage some of that wood instead and making yet another trip to Lowes (not to mention the money I’d save).
Do you remember my old kitchen? 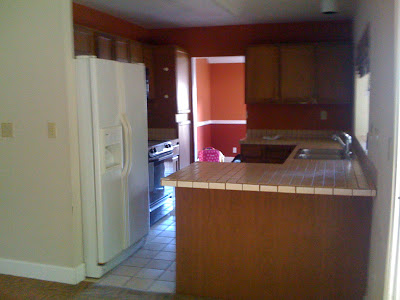 And do you remember how some of the old cabinets were so moldy that I took a sledge hammer to them myself one day when my husband was at work?  Ummm…yeah… 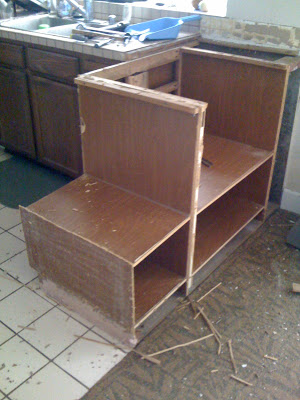 ﻿
So most of the bases weren’t salvagable due to the mold and water damage and general ick. But the cabinet doors were okay, and a few of the cabinet pieces were in decent shape (for 25-year-old particle board…).
I started rummaging through some of the pile (all the moldy ones had long since been taken to the dump), and I found a few good pieces that I thought would work well as bottoms to my boxes. Since the laminate was dimpling slightly on all of them, and they’re relatively thin and weak, I didn’t want to use them as the sides.
Using the cupboard doors as lids seemed like a fairly obvious idea, and I had three large doors that I could build the boxes to fit!
For the sides, I kept rummaging through our garage and found the pieces to an old desk my husband had built as kind of a drafting table/desk of sorts for us. He and I used to share an office for his medical school work and my business, so he built a really long desk that spanned an entire wall in one of our homes, but we have since purchased separate desks, so it was just sitting in pieces. Perfect! 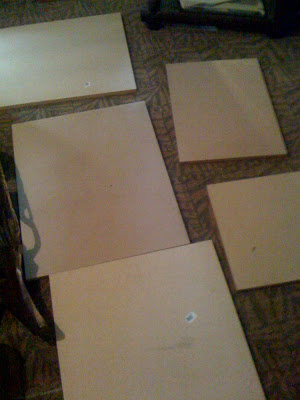 I measured it out, making sure they would fit well inside the cabinet door lids and then cut them with my circular saw. I had every intention of following Ana’s plans and using screws, but to my dismay, my husband had been playing around with the drill (installing new kitchen cabinets or something), and he tightened that sucker SOOO tight that I couldn’t loosen it to put a drill bit in! Now, for those of you thinking I’m a serious wuss, I’m here to tell you that my husband is He-Man. And I may or may not be the world’s biggest wuss. Honestly, people, he’s twice my size. I weigh 1–, he weighs 2–. He doubles me down to the pound, and it’s muscle. Me? Not so much…  I’ve since learned to use vice grips to grab on and loosen it (as it happened multiple times, and I even tried to have my neighbor loosen it to no avail!)

But that’s my excuse for being lazy and just using a whole lot of Gorilla Glue and my trusty nail gun. I used 2″ brad nails mainly just to keep everything in place while the Gorilla Glue dried. That glue is SO strong! I even tried putting screws in later, but it’s nearly impossible to drill through that dumb glue! They are very sturdy without the screws, though, so I’m just leaving them as is! 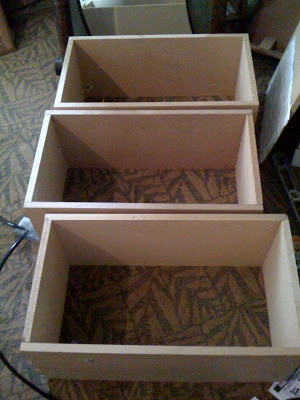 And here they are with the bottoms glued and nailed on. 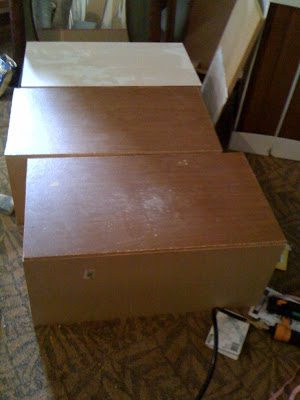 I let those dry overnight and then sanded, primed, and painted them. I chose some fabric to cover them in. I have an entire roll of this blue with brown polka dots, PLUS I had used a can of blue Oops! paint from Home Depot that was almost the exact same color (for $5!), so it seemed like the obvious choice.  I was too cheap to pay for batting, though, so guess what I used… An old blanket! You probably have one or two of these bad boys in your closets, too. You know the ones, right? Really itchy. Pretty old. You don’t even remember who gave it to you or why you keep it in your house since you never actually use them… I’m pretty sure almost all houses have them.

If you check out Ana’s bench/toy box, she did a much more professional job on her upholstery. I’m lazy and didn’t want to bother with sewing it and fitting and refitting, especially since I was doing three of them. So I took the lazy Charlie way out and just stapled the beginning and end pieces down even though it meant the staples would be visible from the back. I knew they’d always be up against a wall anyway, so I wasn’t going to lose sleep over it. 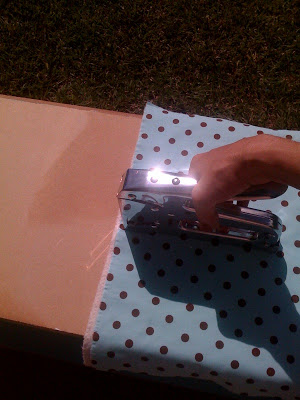 So I stapled the beginning right in the center of the back piece. I actually stapled all the way up that piece, so there were about 10 or so staples there. 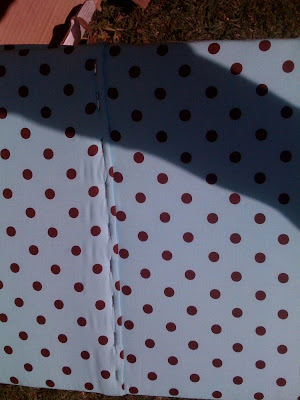 Then I wrapped it all the way around the box and folded the end of the fabric over and then stapled it right up the back center where it met the beginning (overlapping slightly to cover the other staples and raw edge). 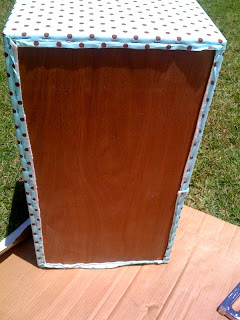 Then I stapled down the bottom. 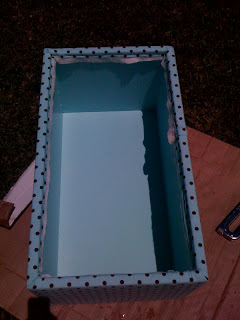 And around and into the inside. Then trimmed excess fabric. And screwed on the lids. A big thanks to my 4-year-old for helping me paint the inside of the lid! She loves to help, and it takes all my strength not to micro-manage and redo her lovely work. I’m taking baby steps to letting go of my perfection here… 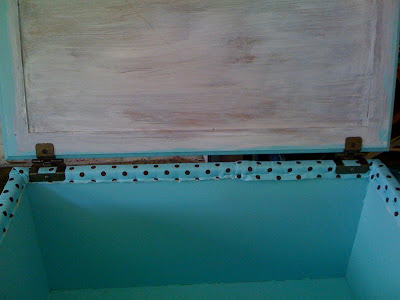 I hadn’t planned to put feet on it. The one that Ana eventually ended up making for her daughter didn’t have feet, and I thought it looked lovely.  But with mine, something just felt off. 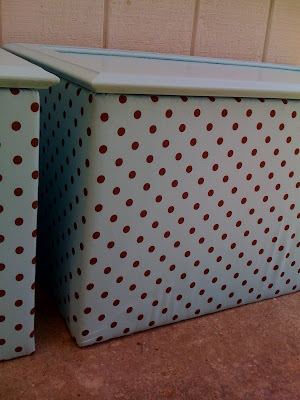 I was also worried about the fabric getting dragged and torn during our many moves if there weren’t any feet. But again, I’m lazy. I found a perfect cheater solution at our Ben Franklin Crafts store as I was browsing the next day. 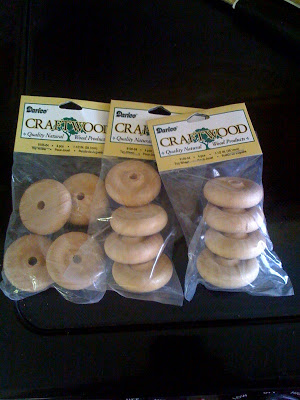 These were 4 for $2.99! They had a larger size that I really think would have worked better, but they were twice as much money, and I wasn’t ready for fork over $18 just for feet. I was okay with the $9 since it was the only money I actually paid for them out of pocket. 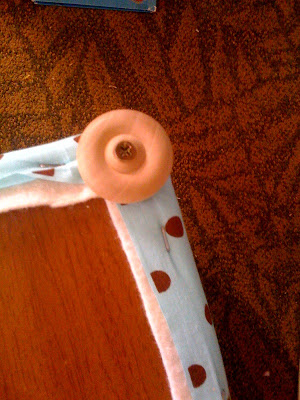 I just screwed them right into the corners! 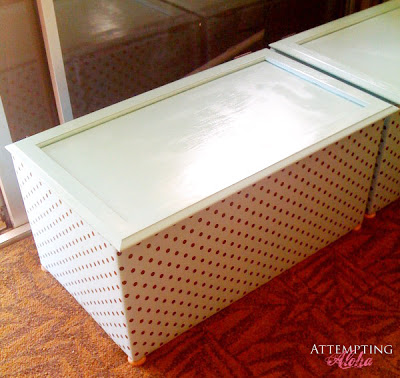 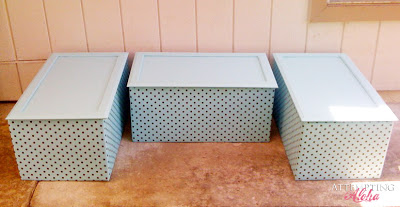 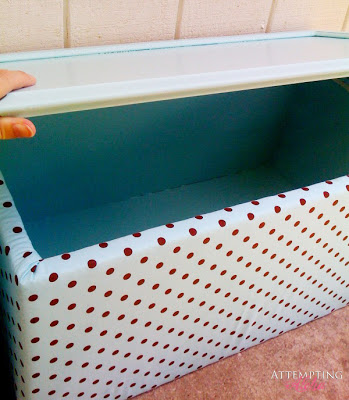 I can’t be positive, but I’m pretty sure I heard a party going on in the stuffed animal toy box that night… And despite their ginormous size, I STILL had to fill a garbage bag with excess stuffed animals and put them in the garage, so we’ll rotate them out. 🙂

And guess what my favorite part is?? ((remember, this is sentimental Charlie speaking here))  My favorite part is that now we’ll have a little piece of our very first home that will travel with us wherever we move. 🙂

How do you contain your toys?

Leave a Reply to Jess @ Frugal with a Flourish Cancel reply

** This is my original design and idea. I hope to ... END_OF_DOCUMENT_TOKEN_TO_BE_REPLACED