So over Christmas, we had a fun little experience that I thought I’d share with you since it was a really good learning experience for our family. I’ve never done a “personal” post on here before, so go easy on me. 😉 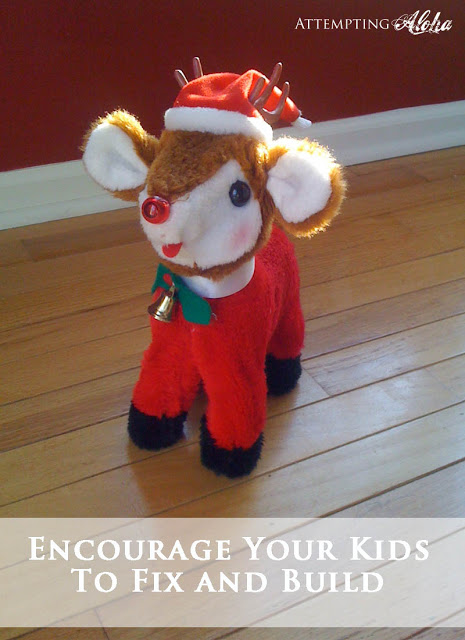 We are a crafting/DIY/fix it up kind of family. My husband has had construction experience in almost every field. He grew up helping on his grandparents’ farm and raising animals, so he has lots of agricultural experience as well. And his dad taught him lots about fixing and rebuilding cars, so he has it covered in that area as well. When household things or auto things break down, chances are Scott can fix it (or he’ll die trying). And I bought my first sewing machine about 8 years ago and slowly started teaching myself from there. I’m also the family electronics guru. My dad had a little side job of fixing home electronics when I was little, so tinkering is a natural thing for me. I’ve replaced the LCD on my iPhone (When “the middle child” threw it on the floor of Costco one day…those floors are deadly! If you’re an iPhone.) I’m the one who hooks up all our gadgets and electronics, and I’ve repaired our laptops countless times. I’m currently working from a hybrid of two of our laptops that both had different components go out, so I Frankensteined them into one. No biggie, right?

I’ve always loved crafts but hadn’t really thought much about it until we bought our first pet fish about 4 years ago.

“Fish? What do they have to do with crafts?” I can hear you asking through the monitor…

Well, our first family pets were two betta fish. One was red, and one was blue. We asked our 3-year-old what she wanted to name them, and told her she could pick any names she wanted. She instinctively shouted, “Sparkles and Glue!”  We chuckled, but we kept the names.

When I told a friend, she said, “You must’ve been doing crafts that day, huh?”  And then it was my turn to be confused, “Wait…doesn’t everyone do crafts every day?”

Needless to say, my girls aren’t strangers to glue, scissors, glitter, paper, fabric, sewing needles, and saw dust. We go to the lumber section at home improvement stores, and they sniff deep and say, “Mmmmm…it smells like our garage!”  They could also recognize the logos for Home Depot, Lowes, Joann, and Hobby Lobby before McDonald’s (don’t get me wrong…we also visit the golden arches, but not with the frequency of the other places).  Even my 2-year-old is good with scissors and knows the colors “teal, peach, maroon, brick red, and Benjamin Moore Metro Grey”. Just kidding about that last one. Kind of.

This Christmas, I had the pleasure of taking all the girls to Wal-mart by myself on a weekend (I deserve a medal. Maybe for stupidity?)  As we walked past the electronics section, my 7-year-old was looking longingly at the Wii’s or DS’s or something…I have no idea what they were. We’re obviously not a “gaming” family. Glitter would probably jam them anyway. 😉   But she said, “Mom, can we get a Wii for Christmas?” I told her they were too expensive, and she automatically responded, “Can’t you just make one?”  Cough. Laugh. Snort. Choke. Ha ha ha ha!   “Well, honey, they have lots of little parts that are hard to get a hold of. They’d be very very very very very very hard for mommy to make and would probably take me a few years.”  (Notice the word impossible isn’t used here. That word’s not used in our house unless we really mean it.)

A couple days pass by, and we get a phone call from Santa!

He talks to each of my girls and asks if they’ve been good and told them they had to be good if they didn’t want him to take away presents.

(Funny side story: My middle child is a bit of a stinker, and at that moment, she realized how naughty she is, and she had a melt down! “I’M NOT GETTING ANYTHING FOR CHRISTMAS!! I’VE BEEN BAD!!” Took me 30 minutes to console her, and we had to have Santa call back. lol)

So Santa also asked each of them to tell him what they wanted for Christmas. The middle child gives a long list. The toddler stares at the phone in disbelief and slight terror. And the oldest — out of nowhere– says, “I have a toy Rudolph that used to play music and walk, and he broke. I would like a new one. And that’s all.”

CRAP!  It’s 10 days to Christmas, and she throws THIS at me?  Ugh.  The Rudolph toy she’s referring to was a toy my dad had purchased at a thrift store decades ago and then gave to her. Who knows how old it is or where it came from. I searched Ebay with no luck. I found some other Rudolphs that played music, but none identical. And even the other ones were over $40. I was looking to spend closer to $5… Blah.

Somewhere, somehow, my prayers were answered, and I thought of a possible solution. I found a cute little kid’s tool kit at Lowes for $8. It had real tools (not those plasticy fake things), but they’re smaller, to fit kids’ hands. Very cute set! My only gripe is that they only come in yellow. Purple or pink would be much more fitting for our family, but oh well. 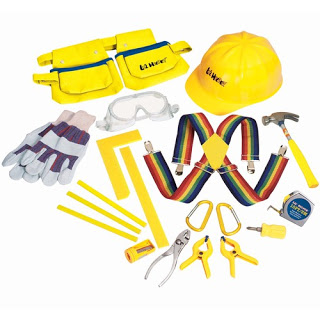 Then Santa wrote her a letter. I’ll just go ahead an put it here for you to read: 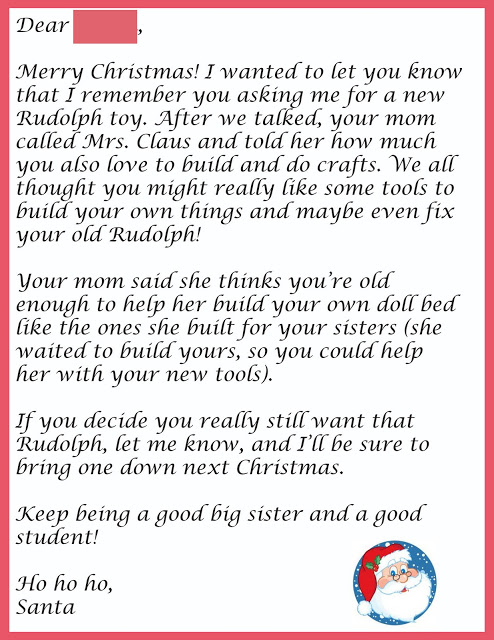 She opened the gift first and then read the letter. I could tell she was disappointed. 🙁   She really wanted that Rudolph and probably was skeptical about whether or not she could help fix her old one.
She set the tools aside, and we kept opening presents. But immediately when we were done, she picked up the tool kit, brought it to me, and said, “Ok. Let’s fix Rudolph!”  Now, if you’re remembering, I’m usually the electronics one, but as soon as I was done helping her get the gear on, I got detained by one of the other children, and my husband was happy to help take over. He was going to start by sanding off the battery terminals since Hawaii is really humid, and they had rusted some.
I wasn’t paying much attention until I suddenly heard Rudolph’s music! He was back from the dead!!  I looked over just in time to see my daughter’s face. I WISH so desperately that I had known the momentous occasion it was going to be and had thought to have my video camera rolling. ((sigh)) The look on her face was priceless. THEY HAD DONE IT!! They actually fixed RUDOLPH!!!   She was ecstatic! There aren’t enough exclamation marks in the world to describe her face. Sheer joy.

So then she wanted to fix and build everything. She wanted to sleep in her tool belt and is even excited to go to Lowes to buy parts to “reupholster” one of their toy chairs (after all our whirlwind home renovations last year, my kids DREADED going to any home improvement stores, but we spent the most time in Lowes).

So there you have it. We’ve created a builder and fixer. Instilled confidence and hopefully changed how she views the world a little bit (buying new things isn’t always the best answer).

Santa also brought the girls their own small sewing machine! So in honor of this increased love of creating and now building, I’m going to be starting a new blog series called “Building and Sewing with Kids”. I’ll take you through some of the fun projects I do with my kids that help them create things they can use in REAL LIFE. Not just things they can send to grandma or stick on the fridge for a couple weeks (although there will still be plenty of those in our house). 🙂

What do you think? Do you build and create real projects with your kids? I’d love to see!!

** This is my original design and idea. I hope to ... END_OF_DOCUMENT_TOKEN_TO_BE_REPLACED