Today, we’re doing a fun little craft.  I was sent a box o’ goodies from ScribbleShop.com and was challenged to create something using whatever random supplies they sent me. The blogger who can create the “best” idea, using the most supplies, wins a pony I think…at least that’s what we’re all hoping. If not, I guess we’ll settle for bragging rights, and it was fun to have to think outside the box and without my usual go-to supplies and mediums. 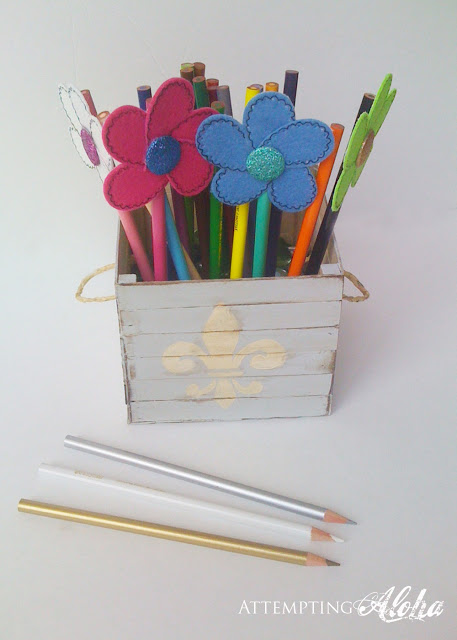 Let me take a second to tell you that Scribble Shop has over 75,000 (yes, that many zeros) craft/art/teacher/educational supplies in their one online shop. When I was first given the challenge, I thought, “A new craft website? Scribble Shop? Their site is going to have like 10 things…this should be fun.”  Ummm…way off.  Imagine Hobby Lobby and Michaels combined but all online. Awesome. If I had my say, I’d like them to have a better fabric selection because I’m real lazy like that and want it ALL. But I guess I’ll have to settle for 75,000 items for now. 😉

And guess what, Hawaii friends…they ship to HAWAII!!  I couldn’t find it anywhere on their site, so I emailed and specifically asked them. They said a few of the really large items are only offered by UPS Ground, so those ones can’t, but almost everything else can be shipped there! Woohoo!  I know how frustrating it is to be limited to whatever Ben Franklin has in stock…

So now on with the craft!

Here’s what they sent me: 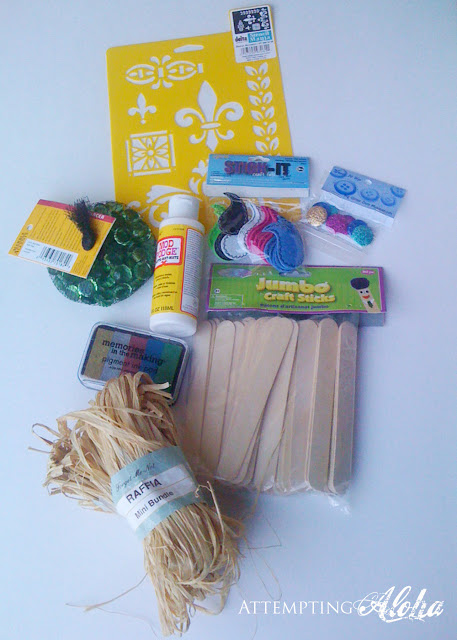 And just in case you like “haul” videos and are curious what my voice sounds like, I made this awkward awesome video for you. 😉

Yes, I sound like I’m 15. And yes, I may not LOOK much older on a daily basis (no make-up and all), and I may also get asked, “Is your mom home?” when I answer the door. Get over it. I AM the mom. Unless you’re a salesman, in which case, “Nope, my mom’s not here.”  Totally honest, and I don’t have to go through the pain of turning them down. 😉

So my first real crafting question was, “How can I incorporate some power tools into my project?”  Hmmmm…those tongue depressors   popsicle sticks are made out of wood. I like to cut wood. And drill it. And build.

And thus, the idea for the crate was born. Once I had the dimensions figured out and knew I would need over 30 sticks cut, I was worried about what a pain it was going to be to cut them all.  So I cheated. And stacked a ton of them together and tied them with elastics. 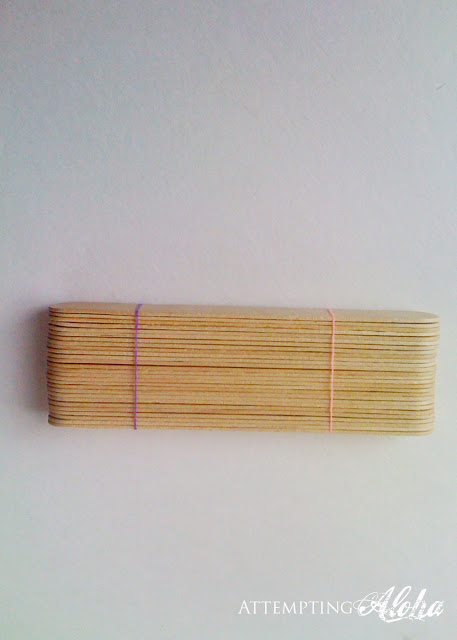 And chopped off the ends with my jig saw. 🙂 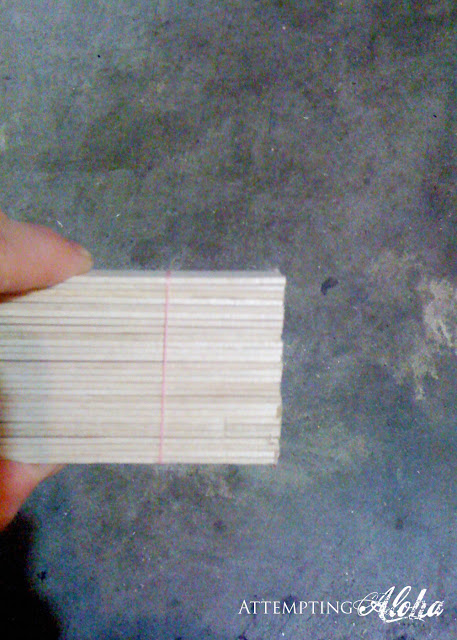 To keep it sturdy, I knew it would need some dowels on the inside corners, so I used a 3/8″ square dowel and cut it to the size I needed. Scribble Shop has a decent selection of wooden products HERE.http://www.scribbleshop.com/category/art-supplies/surfaces 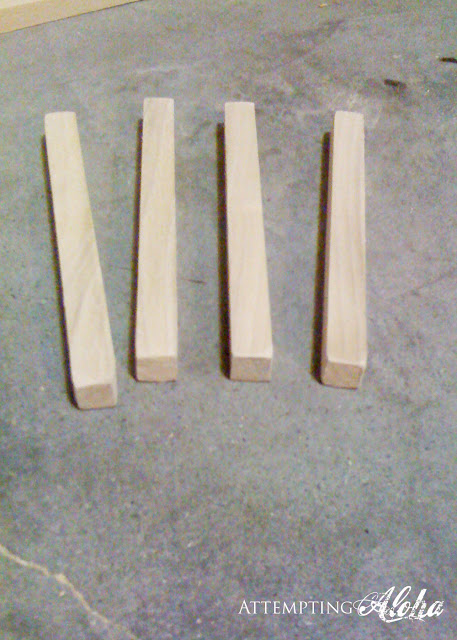 I used 4 posts for the inside corners and then two along the bottom to secure the bottom “slats”. 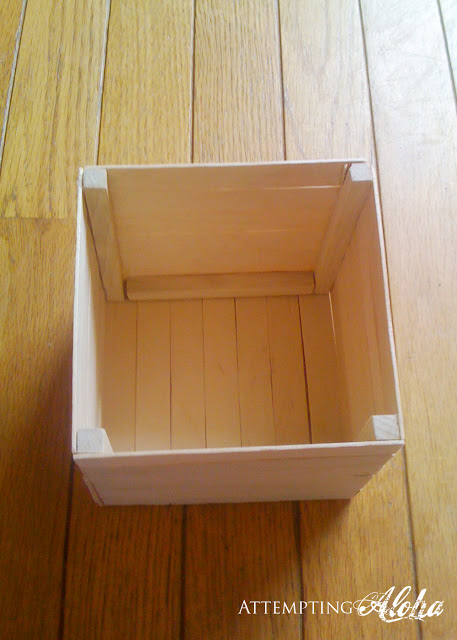 At first, I was trying to be all builder/professional about it and was using Gorilla Glue and staples…that was a disaster. I finally gave up on that idea and assured myself “it’s just a craft…hot glue is fine”. So I used my high-heat hot glue gun, and whaddyaknow?  Worked like a charm. 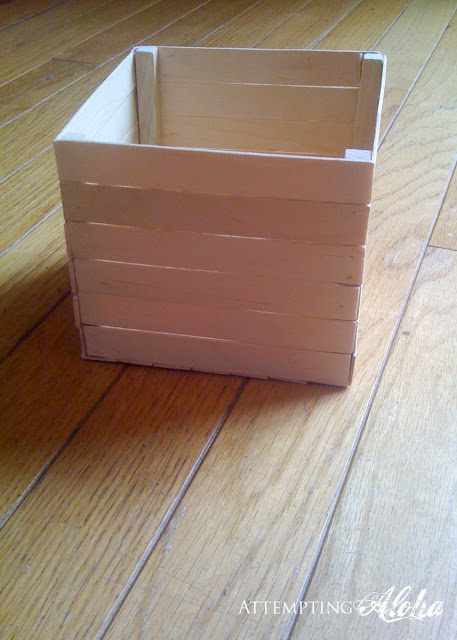 Don’t look for the old staple holes too hard… 😉

I painted it with some random paints I had on hand. An Oops! paint in gray for the base, and an acrylic craft paint for the fleur de lis stencil. I then used the ModPodge as the sealant over top of my paint. It actually gave it a really nice, smooth feel!  Scribble Shop has a HUGE selection of paint. My only complaint there is that they don’t give you the option to see them all on one page. A few of us have requested they change that, so I’m hoping they’ll hear our cries! Because no one wants to click through 24 pages of craft paints, am I right? But I guess if it keeps me from having to take my kids into a craft store, it’s worth it. 😉

I used a brown mixed with water for the glazed/antiqued look. I don’t normally love this look, and I still think I got too much on there, but I wanted to test it out, and since this was a small project, I thought it was a good one to practice on. 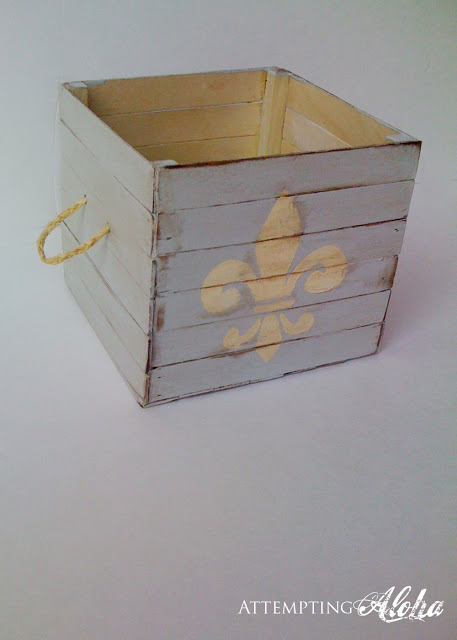 I have made crates before and used jute to make my own handles, so the raffia was a natural choice for the handles on this one.  I just marked where I wanted the handles, drilled a couple holes, and got three pieces of raffia to stick through a hole and tie off. 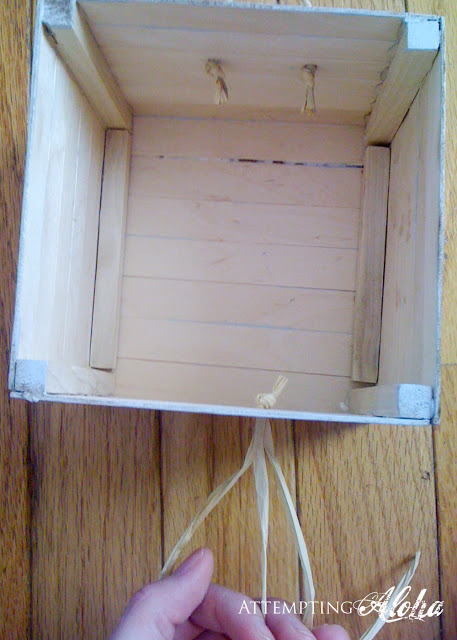 Then braid your three pieces and stick the other end into your second hole, and tie it off and trim excess. 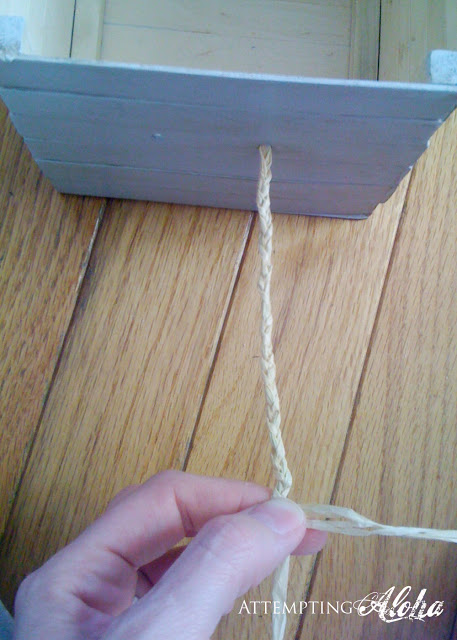 Let’s not make fun of my wonky braid. I was never much of a “Barbie” fan when I was little, so braiding is not my forte.

Next, to give the pencils something to stand up in, I used the packing peanuts and glued them together and stuck them into the bottom of the box. 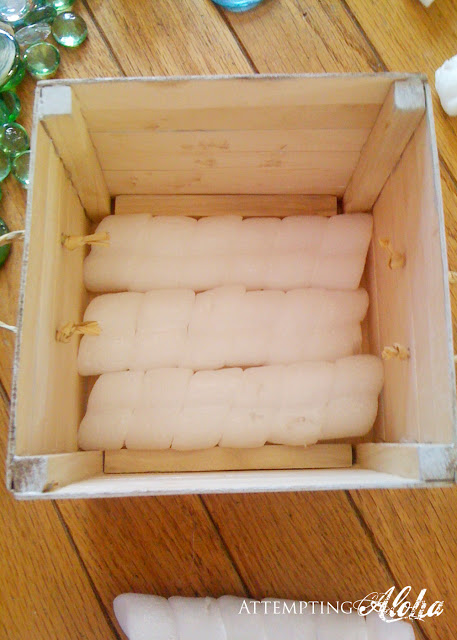 I tried just throwing them in the bottom and then putting the marbles on top, but the marbles just ended up sinking to the bottom, and I didn’t like the look of the two mixed and jumbled together. So they had to be glued down. Then the marbles could be placed on top nicely. OCD? Maybe a tiny bit, but not really! 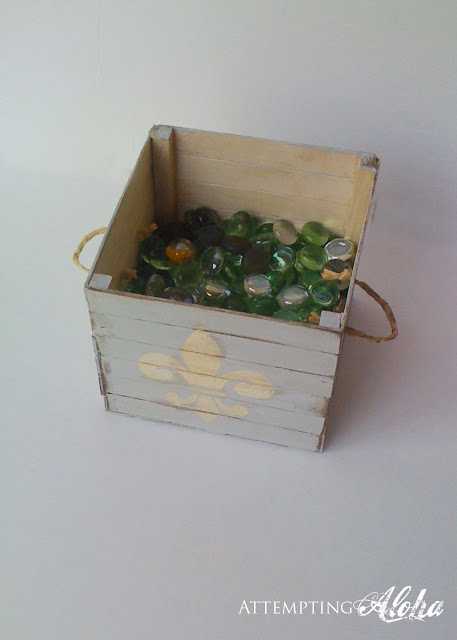 Wait…did you want to see more marbles? Okay. But just because you asked. Not because I took way to many pictures. 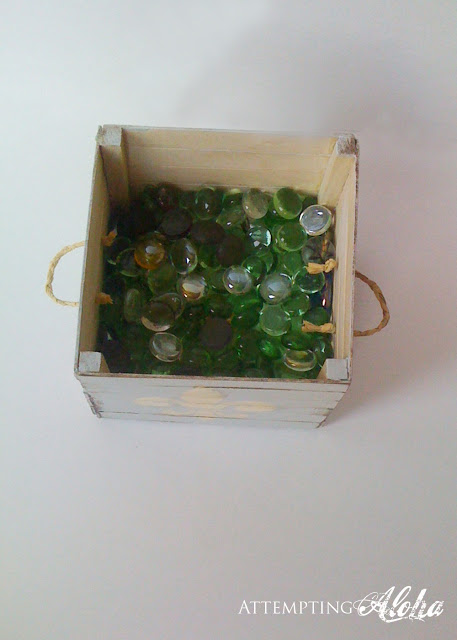 Those paisley stickers were a little more tricky than the rest of the objects. I had initially planned on just making a pencil holder and then trying to use everything else as decorations on the box. But I liked the simple fleur de lis so much that I didn’t want to defile clutter it with lime green and hot pink. So they became pencil accessories.

First, I layered them, so they looked almost like a flower. The pack came with 5 of each color, and I think 6 would have been better for these, but they turned out fine. I traced along the edges of where the top one overlapped the one below it and then cut them all off on their own lines (make sense?). 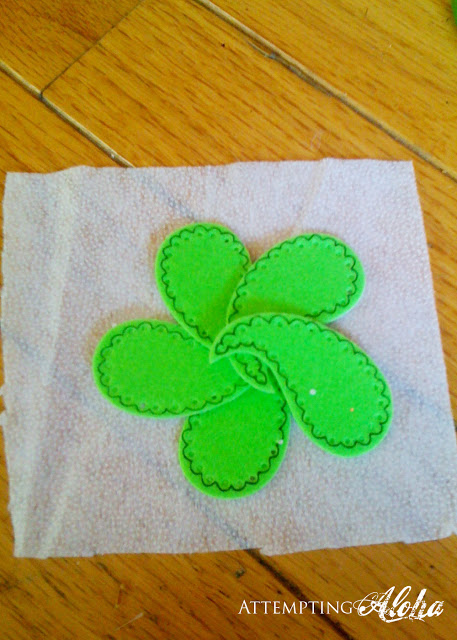 These are stickers, so I just peeled off the backing and put them back down on my interfacing (it happened to be within arm’s reach…felt or something else would also probably work fine). And in case you’re keeping track, interfacing is ALSO found on the Scribble Shop site. Seriously…they have almost everything! 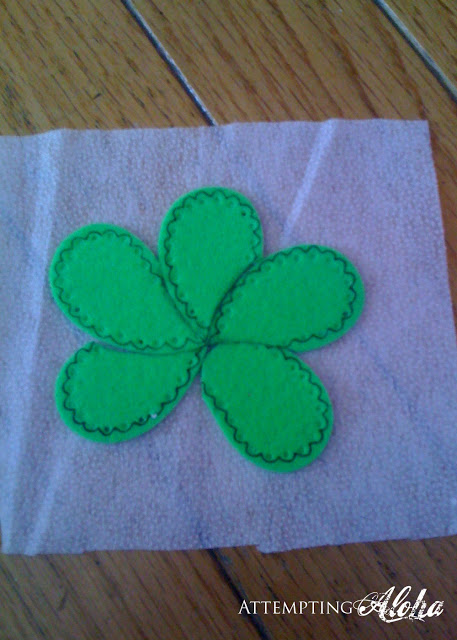 Trim down the interfacing, add a glittery dot button (with hot glue), and then glue them to some pencils and call it a day! 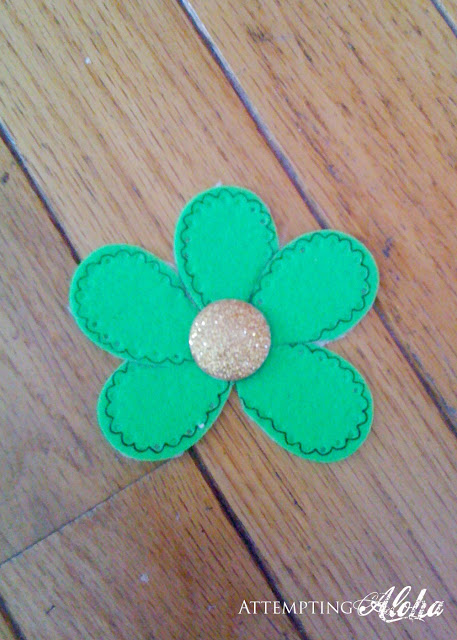 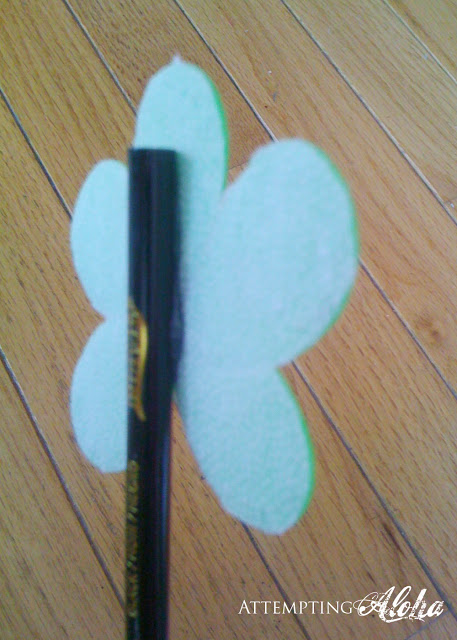 I tried to use the stamp pad to add some dimension to the flowers by giving them a contrasting color, but they seemed to be malfunctioning. At first I assumed it was a user error since I’m a novice when it comes to stamping, but apparently other people had issues, so I don’t feel super inadequate. 😉 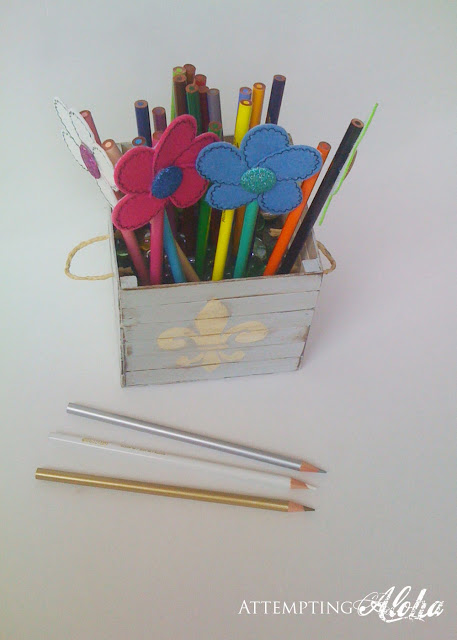 There you have it. A cute little colored-pencil bouquet. 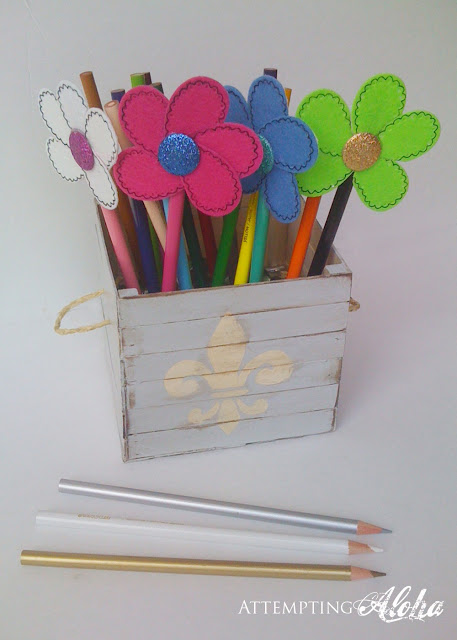 These might be a fun spring teacher gift, don’t you think?
As promised here is the coupon information. It’s good for 15% off your entire purchase now through April 30, 2012.  Just enter    ATTALOHA    at check-out.
DISCLOSURE:  I was compensated for my time writing this post and creating this project by Scribbleshop.com. The craft project and all opinions are 100% my own.
Aloha,
Charlie

** This is my original design and idea. I hope to ... END_OF_DOCUMENT_TOKEN_TO_BE_REPLACED