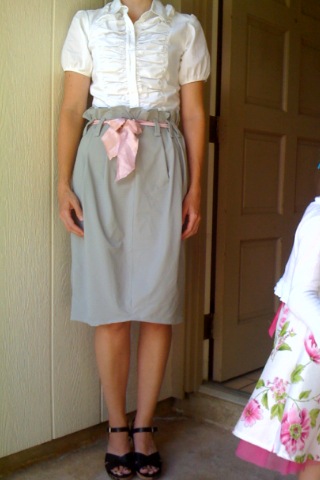 I feel the need to preface this post by telling you about my sewing history. I don’t think of myself as a “sewer”. I have never taken any formal (or informal) courses on sewing or alterations (unless you count the required 7th grade home-ec class where I successfully made a worthless “wind sock”). My mom had a vintage sewing machine as I was growing up, but it was only used for mending, and I never received any instructions on it. I always WANTED to, though. I had dreams of making a stunning, flowing prom dress unlike anything in stores. I even bought the fabric…but I chickened out.

I didn’t really think of sewing again until I after the birth of my first baby. One day, my mom and I were on one of our 3-hour Wal-mart excursions (ohhhhh, the infant days when they would just sleep all the time…), and we passed by the plus-size section where I found the cutest, boutiquey-looking skirt with a big bright applique flower on it. I searched the whole store for one in my size, but there was none to be found. And my mom said, “Why don’t you just buy this one and take it in?”  LIIIIIIIGHT. Bulb. (he he…Despicable Me is a new favorite around here). Mostly she just did all the work, and I kinda watched, but it opened that creative vault again.

Then I thought, “I want to make some curtains. I should buy a sewing machine! I’ll bet I can save us lots of money.” So I bought the cheapest Singer sewing machine I could find (again at Wal-mart and was around $80). But my curtains were AWFUL. Then I got the bright idea to make pajama pants for my husband for Christmas…again…AWFUL, and I gave up on sewing for a couple years.

After baby numero 2 was born, I sewed up a couple basic baby items, and I got lots of compliments on them, and it built up my confidence. Burp rags and blankets are fairly straight-forward and don’t need much of a pattern. Great for beginning! But I got wrapped up in my business, and I didn’t do much actual creative sewing again until starting up my blog and working on things for my home THIS YEAR. Every time my fabric collections come out, my girls want me to make something for them, so I’ve slowly been practicing on play clothes and skirts. I’ve never successfully used a pattern. I’m a wing-it, eyeball it, do it my own way, inspect how something else is done and make it better kinda gal. Sometimes it works out. Sometimes it’s a fail. But I buy cheap fabric from yard sales and clearances, and I have tons from my business, so I’m okay with practicing and failing. I have yet to go out and buy an actual fabric for a specific pattern. I think that might intimidate me still…pressure to perform!

But with the One Month to Win It challenge, the last week was refashion week (I made it the first two weeks but didn’t make it past the third week, so this is not competing). But the competition moves quickly, so we only find out on Friday if we stay in and posts have to be in by Saturday. So I always had my projects completed ahead “just in case” I moved on.

I’ve been adoring paper bag skirts for quite some time, but it seems like they’re always too short for me. I know I’m not matronly yet or anything, but I’m a modest gal, and I have three kids, so the short skirt thing isn’t really happening. Then I saw this lovely one by Nina Ricci for Nieman Marcus.

But the length was right, style was adorable, and I had an old skirt in mind to work with. I had purchased it during my first pregnancy at the DI in Utah (like Goodwill) as kind of a maternity skirt since it was a couple sizes too big for me, and it was winter, so the length was appropriate. I’m sure I paid no more than $4 for it, and it was Banana Republic, so the fabric and quality were great.

I wanted to try a shirt, too, so I snagged one at Ross for $6 with hideous arms but some workable details on the front (as a flat-chested girl, fluffy fronts are my friends). I had all three kids with me, and it was the last store after 3 hours of shopping, so I didn’t bother trying it on and just grabbed a small. 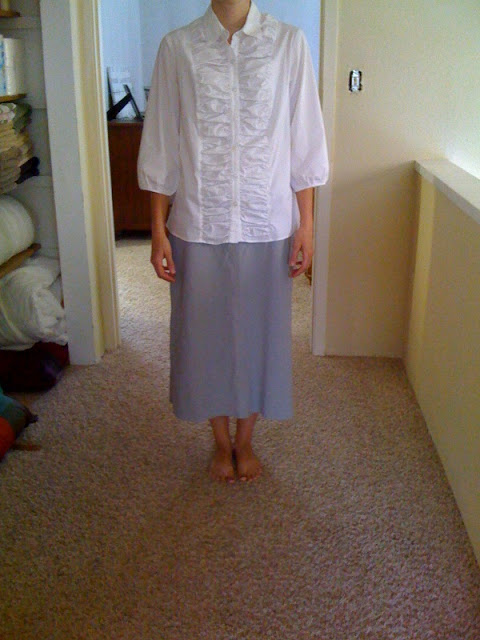 Funny side story. Two of my sisters-in-law were staying with us when I started this project. I bought the shirt on Saturday while they were at the beach, and on Sunday I tried it on and was going to pretend I was going to wear it to church. I walked out of my bedroom and asked my one sil to take a picture of me, and she busted up laughing!  I’m glad she at least knows me really well after 10 years and has faith that I’d never go out in public like this! Thanks again, Erin, for helping me take hopefully the saddest picture of me to ever be on the internet.

Okay, back to the shirt. I’m really closer to an XS, but they only had smalls. AND it turns out their small is really closer to a medium. So this shirt was just a disaster for me. I put it off for two weeks and then finally tackled it yesterday!

We’ll start with the skirt, and I may have to save the shirt for a separate post as this one is already getting a bit lengthy.

Originally, I thought I could just hike the skirt up and tie a cute sash around it and be done. but then the bottom was still too poofy, and the paper bag skirt were all slightly tapered. And even though it was two sizes too big, it still wasn’t enough fabric at the top to make it really ruffley. Hmmmm. Aha! I’ll just wear the skirt upside down! Yes, I’m slightly insane. Yes, every once in awhile it works to my advantage.

I had to unpick and remove the zipper and then sewed it back up just right along that same seam, but that was easy enough to figure out by just following their original lines.

So now I had the floofy top and tapered bottom, but my fabric was a bit floppy. I wanted it to stand up nicely at the top, and instead it was just kind of hanging over my make-shift belt. So I added some iron-on fusible interfacing just to the top few inches to stiffen it up. This was already part of my fabric stash. I have no idea where I got it or how much it typically costs. Bad blogger, I know. Honestly, you’re lucky I even know what it’s called! 😉

Since the skirt was originally too big and was hanging down on my hips, when I hiked it up to my waist, I really didn’t have that much to cut off. This was slightly disappointing as I had planned to use some of the excess to make the belt loops. I had to get creative and only used the very small 1″ strip that I cut off. This is where my phone died, and I didn’t take anymore pictures for the day because I was too lazy to go find the power cord. This is what happens when I’m creating something for the first time. Don’t worry! There will be more of these!! And I’ll do an awesome tutorial and perhaps a pattern. If you’re really nice. I do this for free, you know…

But I slapped on a few belt loops, cut out a piece of fabric for the sash (or maybe 4 or 5 of them for different colors when I feel like it). And I also changed the bottom hemline to go up slightly in the front center as with the Nina Ricci skirt. 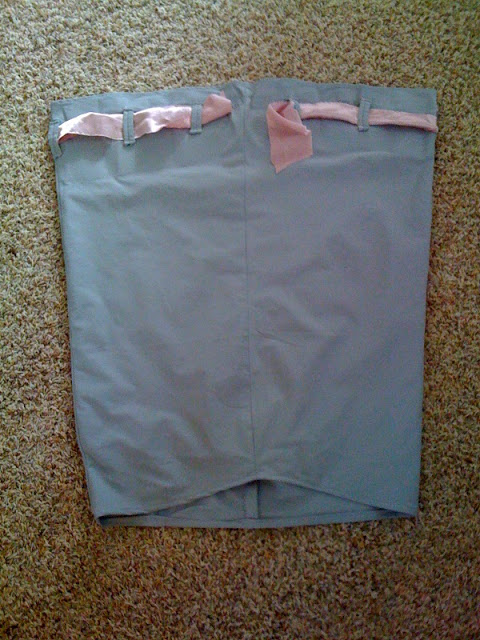 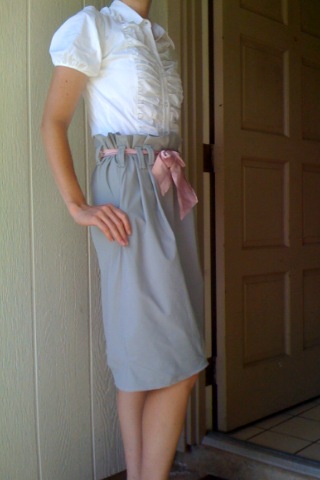 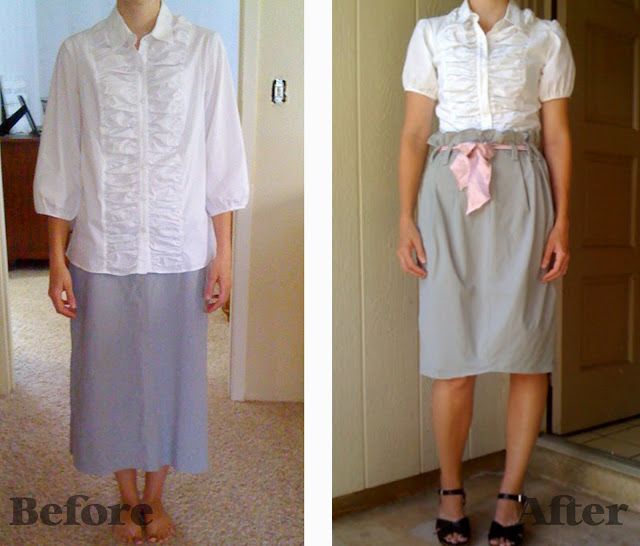 Not bad for a $10 outfit and my first revamp!

UPDATE:  Here is the tutorial for the shirt refashion as well!

** This is my original design and idea. I hope to ... END_OF_DOCUMENT_TOKEN_TO_BE_REPLACED