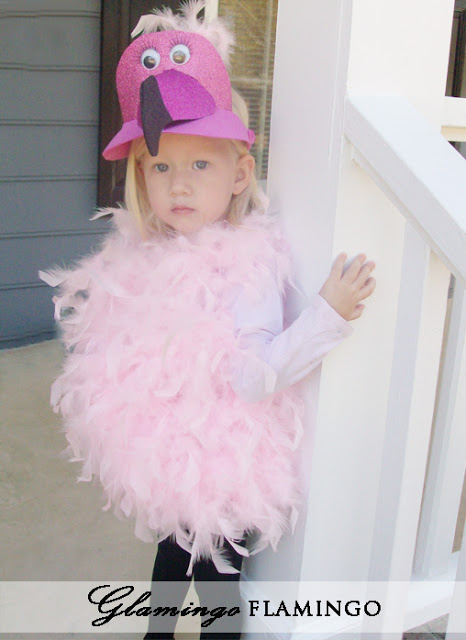 I checked out an old Martha Stewart Halloween DVD from the library a couple weeks ago, and my 2-year-old fell in love with a chicken costume. But (of course), she wanted to be pink! The original costume had a shirt sewn to a onesie and then stuffed with cotton to make it extra fluffy. The poor girl looked a little uncomfortable, and I thought it would probably suffice to just do feathers and skip the stuffing part (and would also allow my child to breathe better)! I’m also extra cheap and didn’t want to ruin a shirt. 🙂  I simplified it by just safety pinning on 2 feather boas to a shirt we had on-hand.

The hat was cute, but not really appropriate for our flamingo, and I was worried my kids would get too hot, and masks aren’t allowed at their school. So, it took some serious brain-storming as to how I was going to make a face. After browsing around Dollar Tree, I found an ugly parrot visor head thingie (technical term I’m sure), and knew I could make a cute flamingo (aka “pink chicken”) using the same concept.  We also skipped the somewhat cheesy feet for practical purposes. While they look cute for a photo shoot, I’m not sure my 2-year-old is agile enough to walk around with rubber gloves on her feet for hours…

Here are my supplies: 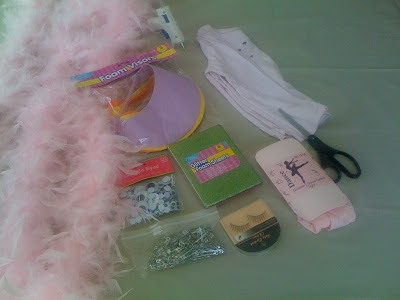 I found everything that I needed at the Dollar Tree. I already had hot glue, scissors, safety pins, and a long-sleeved shirt on hand.

Shirt
Safety pins
2-3 feather boas (depends on how fluffy you want it and how big your child is)
Googley eyes (I got a variety pack with extra large ones)
Glitter foam paper (they have non-glitter as well, and that would save $$ if you have more than one child since there are more than one sheet per color…but mine wanted glitter and pink, so I forked out the big $$ and bought a pack for each child)
Foam visor (these come in a 3-pack)
Template

Optional:
Fake eyelashes (found in the make-up section…obviously optional but definitely makes her “Glamingo”)
Tights (They didn’t have pink in the little one’s size, so we went ahead with black. My older two girls have pink.)
Skirt (our shirt was extra long for my 2-year-old, so the tights were enough to do the job, but my older girls will be wearing tulle skirts with theirs)

Total cost for Glamingo the Flamingo is about $5-8 for one and less (per costume) for more since you’ll only need one pack of googley eyes, glitter foam paper, etc.

STEP 1:  Print your templates and cut them out 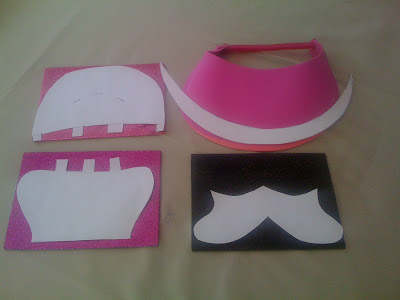 STEP 2: Cut out your glitter foam shapes and trim the visor down. The lines in the “face” piece need to be slit to allow the beak to be attached. 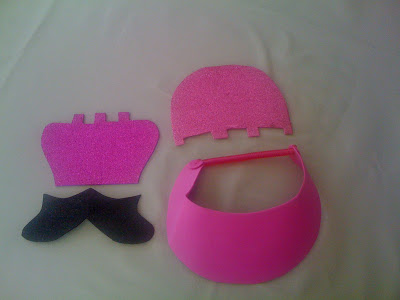 STEP 3: Fold the black tip of the beak in half and glue the front edge together. Be sure not to glue all the way around. Leave the back part open like so: 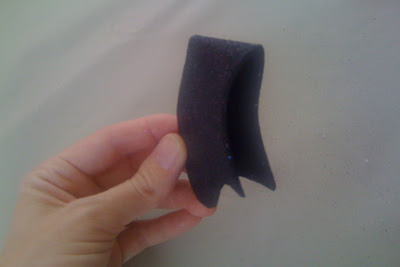 STEP 4: Fold the pink part of the beak in half just to get a crease, and then glue across the straight edge and attach to the black beak tip. 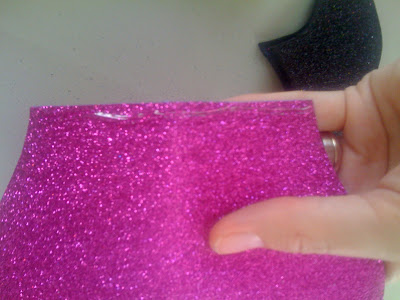 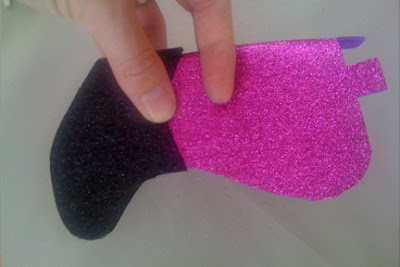 STEP 5: Line up the visor and the face so the centers are aligned. Then glue each of the tabs to the bottom of the visor (I found it easier to do the center two first and then the outter two after those were set). 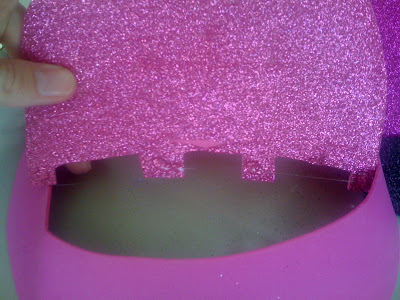 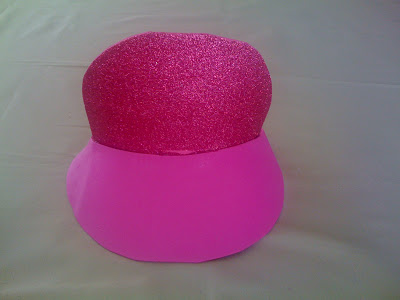 STEP 6: Stick the three beak tabs into the three slots on the face, put glue on the tabs, and glue them up (you can see the underside of my beak is purple in the second pic). 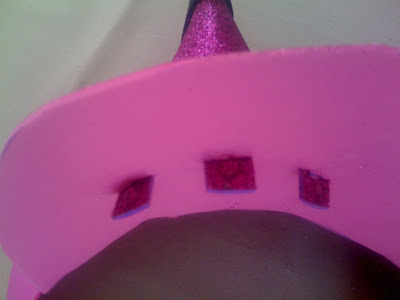 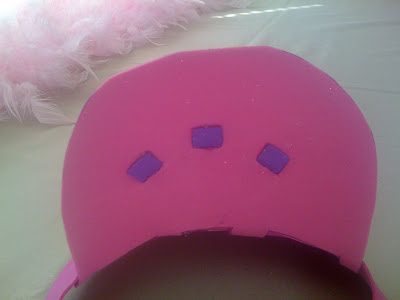 STEP 7:  Secure the beak to the visor, so it’s not flopping around. I just added a drop of glue to the end and then another one on each of the two sides of the beak. 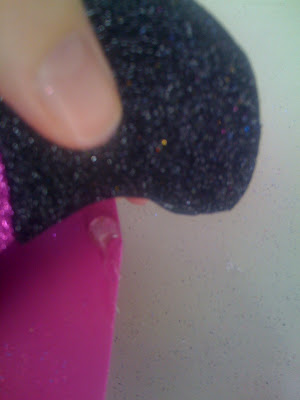 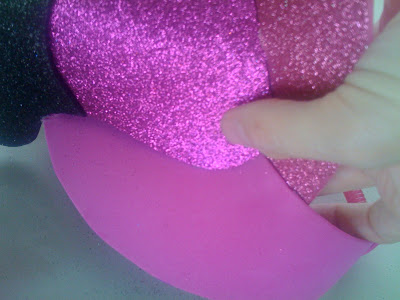 STEP 8: Glamorize! I found it easiest to add the eyelashes to the eyes before putting the eyes on. That way you can control which way your eyelashes go. It’s harder to get the two sides (eyelashes) even when they’re already on the face. 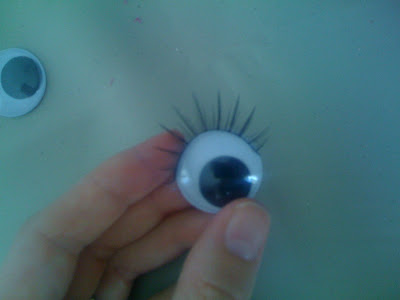 I didn’t snap any pics of pinning the feather boas on. It was pretty much just trial and error. I wrapped it around like a regular boa and went from there. Be sure to keep it loose and drapey, so your little one can pull it on and off their head. 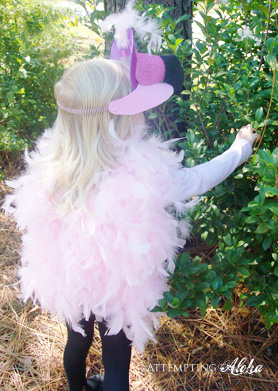 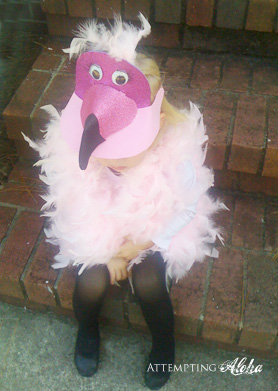 Definitely the cutest, cheapest, easiest costume I’ve ever made!

As always, I just ask that you share the aloha by becoming a follower if you use one of my PDF’s. Mahalo!

Click here for a link to the Google Doc pdf printable.

** This is my original design and idea. I hope to ... END_OF_DOCUMENT_TOKEN_TO_BE_REPLACED