Aloha!
Today is a really simple project: DIY fairy doors! And the best part about them is if you do any kind of woodwork, you can probably make them out of scraps.

This post contains Amazon Affiliate links. They link to products I used in the tutorial, and all opinions are my own. 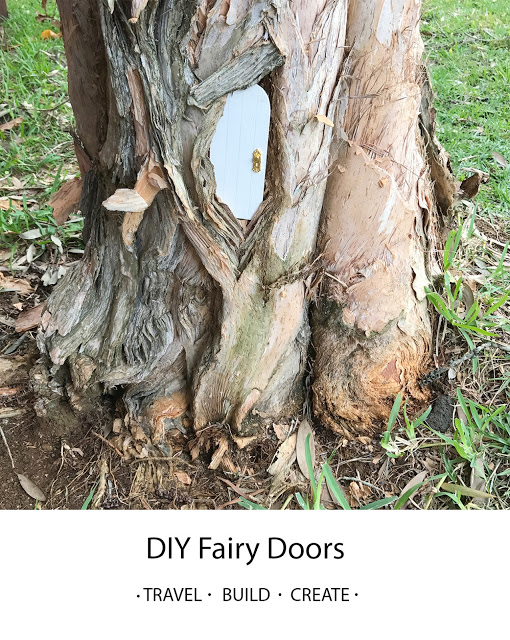 We took the kids to Ireland last year, and I have to tell you, I’ve never seen a more magical country. It was truly amazing. I’ll do a full post on Ireland another day. But one of the days, we stopped at Brigit’s Garden in Galway. It has lots of replicated things from Celtic times and traditions, and it was just a really fun place in general. But we got off the beaten path exploring in the woods, and it was honestly like something out of a fairytale. It was SO green that I couldn’t even believe it. I took hundreds of pictures just on that little walk, and none of them do justice to it.

Our favorite thing about the walk was happening across these little hidden fairy doors, though. There was no mention of them in the brochure or in the kids scavenger hunt, so they seemed very mysterious to my kids, and they had a ball trying to find the fairy doors, fairy rings (group of mushrooms that grow in a circle), and leprechaun houses. We spent many a moment just sitting still, waiting to catch a glimpse of a fairy or leprechaun. My middle daughter thinks she saw one flying. If it can happen anywhere, I believe it could happen there! 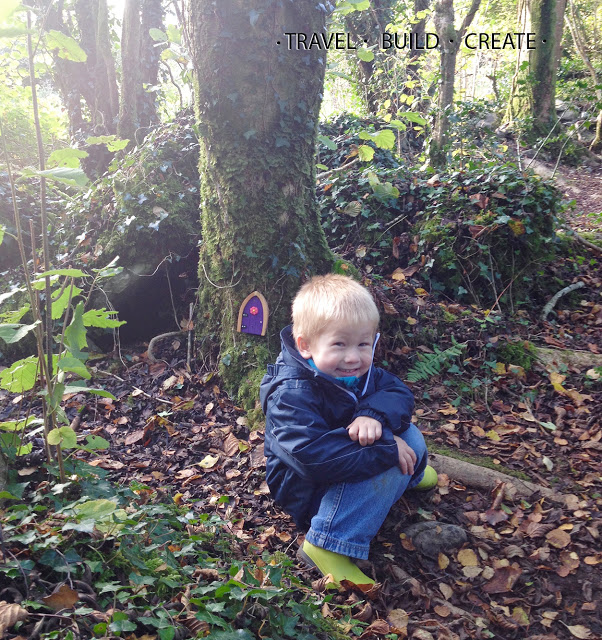 He was so excited to find his first door! Even if it wasn’t blue. Ha!

They were different sizes, too. You can see this one was really tiny. 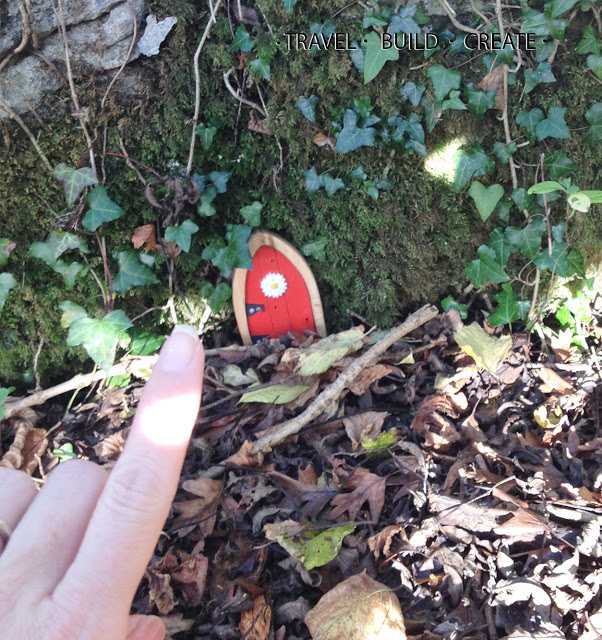 Anyway, when we came home (back to Italy), I promised the girls we would make our own fairy doors. Then we moved across the world (here to Hawaii), and life just got crazy. I finally got around to making my first set in February when I got my scroll saw for Valentine’s Day. So romantic, right?!

I actually ended up making these doors on two separate occasions, and I did them differently the second time around. The first time I made them using balsa wood to keep them nice and thin. This allowed them to look more flush with the tree and rock wall I was placing them against. I also purchased these knobs from Amazon

to use. They’re absolutely adorable, and my kids loved them! But…they’re not cheap. They cost around $4 for one set (a knob and hinges). That’s not really expensive if you’re just making one door. It’s a steal, actually. But if you have to make 15 for a big group of 8-10 year old girls, it gets a little pricey. So I’ll give you some different options.

Wood – Lots of options here. I used 1/8″ balsa wood the first time and then 1/2″ plywood. Both worked great

Paint – We stained some doors, used acrylic paint on some, and latex on some. As long as you give it a finish coat if you plan to leave it outdoors, your paint choice shouldn’t matter too much.

Glue – For my own doors, I used a weatherproof super glue. I knew the girls would be a bit more impatient, so I gave them two option of either hot gluing them right at the party and taking them home immediately.

Knobs – As I mentioned, I originally purchased these knobs from Amazon

, and I love the look. But we ended up using various beads for our large group to cut down on costs. 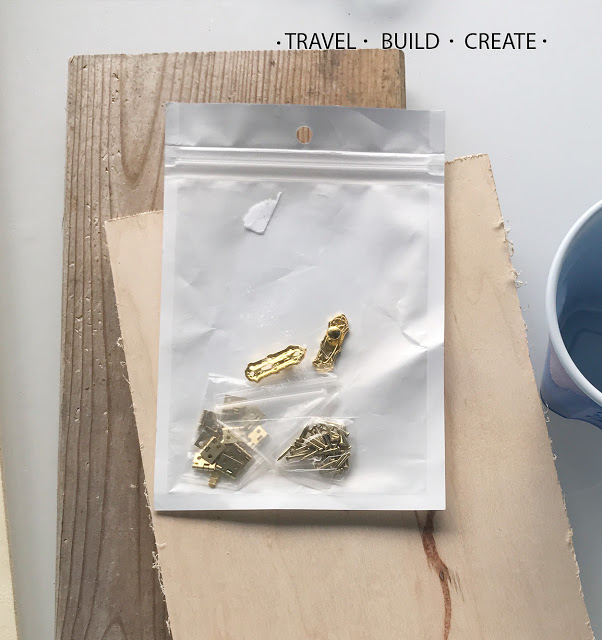 The first step is to cut out your doors. Fairy doors can come in all shapes and sizes. Circular (hobbit-style), pointed, rounded top, and traditional rectangular. I had over 30 of them to cut, so I opted to cut the majority in basic rectangles of varying sizes with my miter saw. Then I did about 14 with rounded tops using my scroll saw (could also use a jig saw) and even did one round hobbit door. 🙂  They ranged in size from 1.5″ x 2.5″ tiny doors to 4″ x 6″ larger doors. 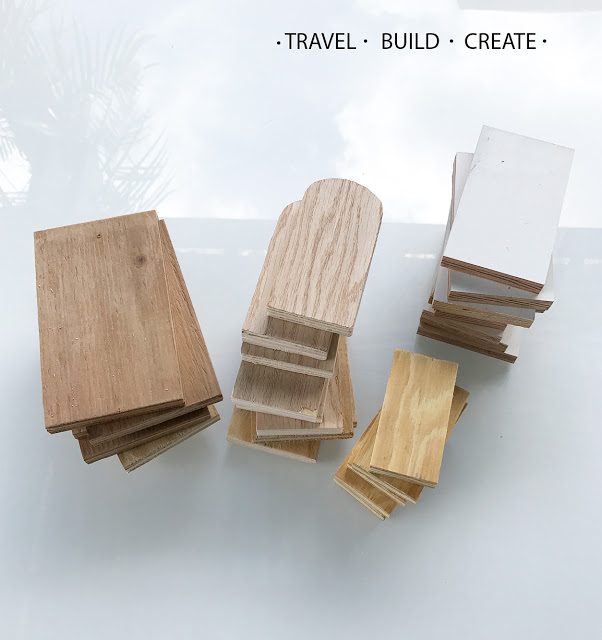 Next, you need to decide if you want the “slat” look to the doors like my first picture where the door is inset in the tree. You can see the faint lines in that one. To get that look, I held a ruler on the wood and then ran down the edge with a mechanical pencil with no lead. The wood is soft, so it leaves the indentation of the line without leaving pencil markings.

For our group painting project with over 15 girls, I covered the tables in cheap plastic tablecloths

on the floors under the table since we were in a carpeted room. Ack!

to last a few years. Then I left the creativity up to the girls. They LOVED it. I was really amazed with their creativity. Some made designs on them. Some swirled colors, some drew in peep holes. It was so fun to see what they came up with. 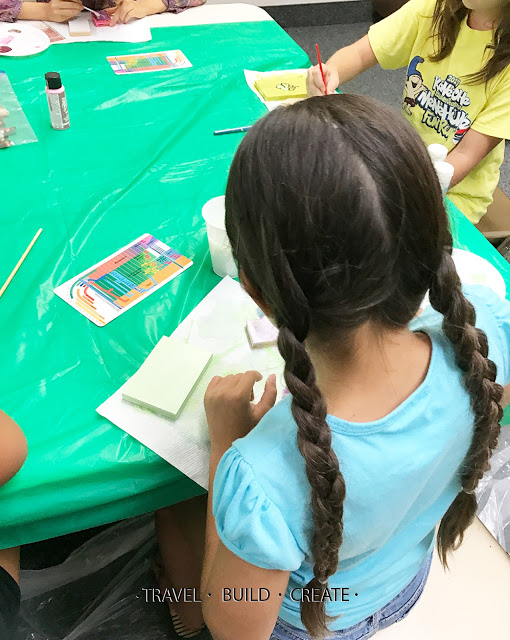 This was one of my favorites. She took one of my pre-primed white doors and then dipped a small brush in the paint and then tapped it with another brush to get the splattered effect. So cute! 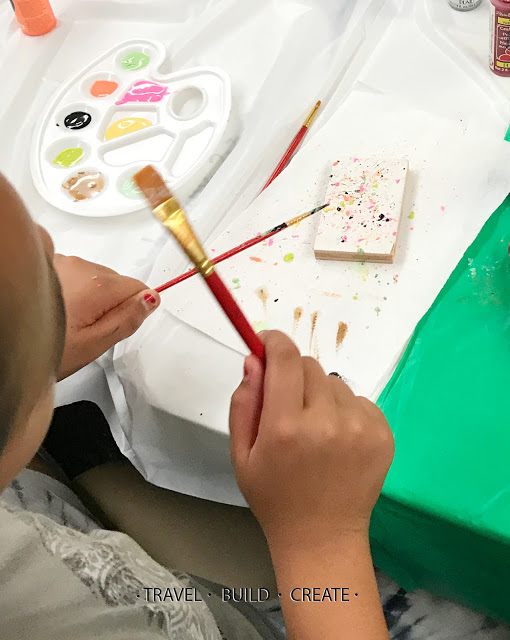 And this is one that I made with the balsa wood. I used watered down brown to give it kind of a stained look and then lightly dry brushed the black and darker brown on. 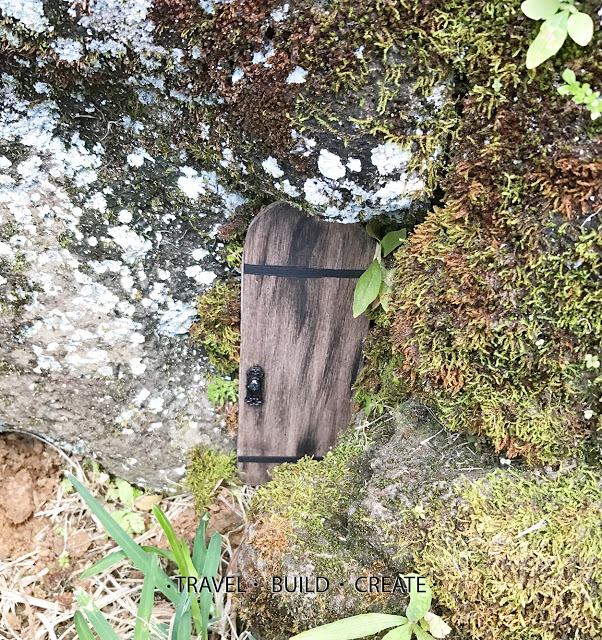 Since the knobs were a little more expensive than we wanted to spend for 30 doors, we had to be creative. Remember where I mentioned I’m a craft hoarder? Well, my thrifted bead collection is pretty substantial. I let the girls sort through and find their own treasures. I wish I could have taken a picture of all of them because some were amazing. One girl even found one that looked like a knocker, and we put it right in the middle of the door!

These are the few who were patient enough to let me take them home and use the better glue on the knobs. The rest took theirs home right after we hot glued on their beads/door knobs.

** This is my original design and idea. I hope to ... END_OF_DOCUMENT_TOKEN_TO_BE_REPLACED